"An abomination! The experiment was a failure. Back to the drawing board, and...dispose of the subjects."
- Madness: Project Nexus 2 Kickstarter

Abominations are crazed, deformed zombie-like enemies that are unique to Madness: Project Nexus (Classic) and MADNESS: Project Nexus. Like the zombies they can take many shots without dying. They debut in Episode 1.5, level [1.5-C]. They have been mutated and several pieces of flesh have been cut from their bodies, making their muscles visible. Their arms have been strapped to their torsos with belts.

Abominations with their arms strapped down will attack the player using their heads and bodies. Due to its limited attack options, an abomination with its arms still strapped may drop-kick their enemies to disarm and knock them down. Because of this, it is recommended to use ranged weapons during their first stage.

When abominations are reduced to half health, they will topple over and then stand back up with the straps around their arms broken, unless they have been decapitated. Now free to grapple their foes they attack in a similar way to zombies: abominations will seize targets in the same fashion, but instead of draining their TAC-Bars, they will rapidly headbutt them, dealing direct damage to their health. Similar to zombie attacks, the player must mash the movement keys in order to break free. Since abominations will not disarm the player after their arms have been freed, landing melee attacks on them in their second stage is easier.

In the penultimate room of level [1.5-C], a giant abomination, Mag Agent: Gestalt, is present. Like normal abominations, Gestalt attacks other non-abomination characters like agents and the player. He can either pound foes or body slam them, knocking them back and disarming them.

The abominations are a planned unit for MADNESS: Project Nexus. From the concept art, they are shown to have hinged mouths like zombies.

With the introduction of the Asylum Patient, it's heavily implied abominations were a failed first attempt at the experiment that would later produce Sleepwalker Patients. This was later confirmed by Krinkels. 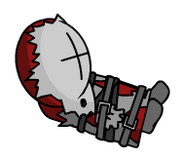 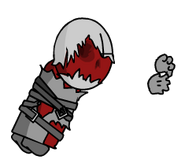