"Intruders? Send in the G03LM Units. If they fail...well, then we deserve whatever comes next."
- Madness: Project Nexus 2 Kickstarter

The G03LM (Standing for Generation-03, Limited Model) is a special enemy type appearing in Madness: Project Nexus (Classic) and it's sequel. G03LMs are completely armored and nearly immune to bullets. They are about the size of Mag Hank (or about 1.35 times the size of a normal person). They often carry heavy weaponry, including submachine guns and giant mallets. The name, G03LM, is a distortion of the word, 'golem.' Their melee attacks penetrate the TAC-Bar and will directly deal damage to the player.

In order to kill the G03LM units, the player must first use melee or unarmed attacks in order to knock off their helmets, revealing a hideous, monster-like face. However, when doing this, the player is exposed to the G03LM's melee attacks, which can cause the player to fall over and drop any weapons being held. This can be temporarily avoided by the player hitting the G03LM with a dash attack, causing him to stumble for a few seconds. After the helmet is knocked off successfully, the G03LMs can then be killed by bullets to the exposed head. It is advised to use unarmed combat against their armor so that the dodge ability can still be intact while fighting them. Despite their immunity to firearms, G03LMs can be knocked down, disarmed, and even killed by M203 grenades.

In MADNESS: Project Nexus, they reappear in armor more akin to medieval knights and are well spoken and articulate. Project Nexus also shows that a few G03LMs are able to preform jobs in the medical field and one serves as the main gameshow host to Slaughter Time. In their concept art, they are shown to have a mutated and stitched-up body under their armor. The method in how they are killed has also changed, armored ones instead requiring their helmets to be removed via a takedown, and their exposed faces can now be damaged from methods other than firearms.

When in combat, they tell the players to stand down or submit to them. When getting attacked, they say that is pointless and to refrain from doing that. When they have a unique speaking part, they often say things regarding trespassing (Ex: “Oh. You have seemed to have wandered the wrong way.”).

The G03LM Mk1s are the most basic forms of the G03LM unit with 180 health points. In Story Mode, they first appear in level [1-F], the Stronghold. In Arena Combat Mode, the first G03LM unit makes his appearance in Wave 12.

As of the 1.6 update, G03LM Mk1 scrap armor can be bought in the store. They are the best equipment for headgear, face gear and body armor, on par with the Robocop and Cadet outfit.

The G03LM Mk2 units first appeared in the [1-G] stage of Madness: Project Nexus (Classic). They also appear in waves 37+ of Arena Combat Mode. They wear the same armor as the original G03LMs, but colored black with a red trim and much more durable.

They can be killed the same way as the G03LM Mk1, but are much harder to do so. G03LM Mk2s are equipped with any weapon as a primary weapon (the one in Story Mode uses a mega hammer and minigun as a secondary weapon.) Their helmets are much more sturdy and secure than the Mk1 versions, as they are about six times as strong (The Mk1 helm taking 5 hits and the Mk2 helm taking 8 hits for each of the 3 times it cracks). However, any time the G03LM Mk2's mask is cracked, the G03LM will stumble for a moment. Additionally, their unarmored bodies are more resilient to those of their Mk1 counterparts, requiring more damage to be taken down.

Strangely, any visible damage done to the G03LM Mk2 helmet disappears when it is knocked off.

Zombie G03LMs are the zombie variants of the G03LM. They are a part of the Zombie Arena Mode of Madness: Project Nexus (Classic), first appearing after Wave 9. These G03LMs wear dented-up armor and will sometimes spawn, lacking a protective bulletproof helmet.

Like the G03LM, zombie G03LMs must have their helmets, if any, knocked off before taking any damage. However, similar to zombies, these G03LMs cannot use weapons and will usually drop them if held.

On the other hand, because of their size, zombie G03LMs cannot steal weapons or ammunition from their foes. Like regular G03LMs, they can only used unarmed attacks to knock over and disarm victims, inflicting direct health damage (although the damage inflicted by Zombie G03LM is notably higher compared to regular G03LM). This also makes them different from other zombies, who drain the victims' TAC-Bars before killing them.

Notably, no G03LM Mk2s have became a zombie or have never seen being a zombie in the actual gameplay, however they are in the game files.

Some G03LMs in arenas and some levels will spawn in with no armor.

In MADNESS: Project Nexus, their appearance drastically changed. Instead of having grey bullet proof armor, they have a giant mask with giant eye holes with wireframes in the back and a chestplate that only covers his front. You can damage him normally without ripping his mask off.

In MADNESS: Project Nexus, their armor is now white and grey and they wear a mask over a part of their helmet. The only way to damage him is to use fire, explosives, or remove his mask.

The G03LM Mk.3 are G03LMs that only appear in the sleepwalker program of the arena mode and in interactive mode. They have armor similar to that of a G03LM Mk.2, but with the colors black, gray and red, similar to the Blackguard, and the strategies to defeat them are the same as that of a G03LM Mk.2, just with the difference that the MK.3 have two corpus and usually comes with a heavy melee weapon and a minigun.

The Dissonant G03LMs (also called G03LM Mk.D) are G03LMs with robotic-looking gray armor. They have two megachettes, two corpus, the ability to teleport above the player to attack, can be damaged without removing their armor, explode quickly when killed and only appear in interactive mode and in the final mission "The Rush".

The Tower Guards are a new set of G03LM's appearing in MADNESS: Project Nexus. They dress in a manner similar to a medieval knight, wearing elaborate suits of armor complete with capes and even wield medieval weapons. There are three different types of Tower Guards, and they each wield a different weapon.

Church and Jorge are a pair of G03LM's affiliated with MERC who serve as a recurring boss fight, and act as a pair of rivals for Sanford and Deimos, as they both respectively specialize in melee combat, and marksmanship, similar to Sanford and Deimos. 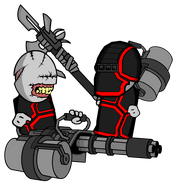 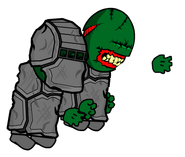