Madness: Project Nexus (Classic) is a Madness Combat game. It was also unofficially referred to as "Madness Interactive 2" by Krinkels. It was released on March 25th, 2012. The current version is V1.8, last updated September 9th, 2014. The development team is as follows:

The game focuses on episode-based gameplay, with different characters to play as, along with an Arena Mode where you can create and upgrade your own character who you can customize with gear and weapons. There were originally 3 Episodes planned, with an appearance from the entire Madness Combat cast.

According to The-Swain, Madness: Project Nexus was supposed to be a simulator of the Madness Combat episodes, placing them right in the middle of the action that made the series popular. [1]

According to Krinkels, Madness: Project Nexus cannot be updated anymore. Certain symbols keep on swapping around with other ones, and et cetera. [2]

The following is a list of features of Madness Project Nexus.

Features that were planned to be released.

*Special Attack: A special attack can be executed by gun-using foes. A special attack is a charged attack that, when performed, will knock down the player, penetrating the player's TAC-Bar and causing damage. It can be prevented by wounding/killing the opponent or by dodging/blocking** the attack at the last second.

**Blocking fails for lower-skilled characters, such as Sanford and Deimos.

Story Mode is a game mode that allows the player to play as one of Madness Combat's main characters. Each level has its own goal and must be completed in order to unlock the next one.

Episode 1 follows Hank, Sanford and Deimos in their mission to bring down Project Nexus. The final boss is Mag Agent: N.

Episode 1.5 follows Dr. Christoff and his involvement in Project Nexus's origin. This episode is significantly more challenging than Episode 1. The final boss is Phobos.

Arena Combat is a game mode that allows the player to use a customized character to fight enemy units in an arena. These units consist of the enemies seen in Episode 1 of the Story Mode such as agents and G03LMs. Every kill gives the player a certain amount of experience and money. After gaining a certain amount of experience, the player will level up and be awarded with points that can be spent on increasing stats or gaining weapon perks. Money can be used to buy weapons and hire mercenaries for the player's team.

USP Match
Add a photo to this gallery

Uzi
Add a photo to this gallery

USAS-12
Add a photo to this gallery

TAR-21
Add a photo to this gallery

Urinal (stored)
Add a photo to this gallery

Minigun
Add a photo to this gallery

The first screenshot of Story Mode.

An early leaked screenshot of Jesus.

A screenshot taken from the Teaser of the Gear Shop.

A screenshot released on Facebook by Krinkels. Later revealed to be for level 1.5-C. 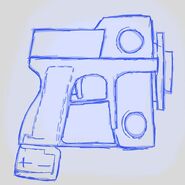 A concept drawing released by Krinkels of a weapon that would've been included in Madness: Project Nexus.

A screenshot released by TheSwain, of level 1.5-A. 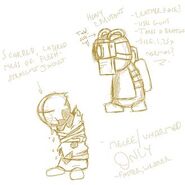 Concept Art detailing the Abomination and the Sleepwalker patient