Madness Combat 11: Expurgation is an animation from Krinkels. It's the eleventh installment in the main Madness Combat series, and the fourteenth episode to be released. Starting where Madness 10 left off, with Sanford and Hank climbing down the ladder of the Auditor's fortress, but soon they realize the threat wasn't eliminated but just reborn. The episode was released on January 8th, 2019.

MC11 is notable for its very long development cycle compared to previous episodes, being released over seven years after Madness Abrogation.

Stated in a blog post on July 25, 2012, Krinkels mentioned that during his time away at the San Diego Comic Con, he had finished writing a script for a Madness 11. Another blog post on July 31st on deviantART indicated that Krinkels had begun animating. When asked about Madness Combat 11, Krinkels replied that it "is so out there, it will either be the best Madness episode, or the worst."

On April 2, 2013, in a blog post, Krinkels stated that like Abrogation, this episode will contain a lot of flames and lightning.

On June 24, 2013, Krinkels released a screenshot of the animation depicting Sanford firing a Glock 20 next to Hank. This was posted on both Newgrounds and Facebook.

On December 3, 2013, Krinkels released another screenshot on Facebook. This one depicted what appears to be a giant hole in the side of a building, with a similar hole in the ground nearby. Shadow tendrils are snaking about, and the burned, skinless bodies of what appear to be grunts seemingly sinking into a pool of darkness.

On Feburary 2, 2017, after two years of silence, in a blog post Krinkels released a new screenshot, depicting a work in progress scene of Sanford aiming a Glock 20 at a bloody skull with red eyes. 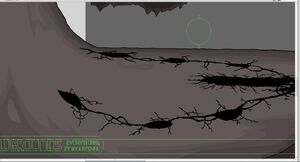 At the beginning of 2018, Krinkels made a YouTube post, stating that Madness 11 is just a side project and he also showed the Madness Combat 11-files on his computer. 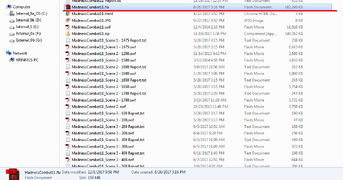 As he uploaded CHASE.fla on YouTube on January 11, 2018, he wrote in the description, that he will make the next one when he reached the penultimate scene in MC11 development.

On February 4, 2018, he held a livestream on YouTube while animating SACRIFICE.fla. The description of the livestream said: "this is not mc11. mc11 is sitting on 7775 frames completed."

On February 17, 2018, he held a third livestream, in which he continued animating SACRIFICE.fla, this time the description said: "THIS ISN'T MC11, MC11 HAS LIKE 80 KILLS IN IT THOUGH, SO IT'LL BE DONE HERE SOON ENOUGH IF I DON'T KEEP GETTING DISTRACTED HAHA h-hahah".

On March 25, 2018, he held again a livestream, animating ANAMNESIS.fla, with the video description saying that the MC 11 progress is now at 8775 frames.

On June 17, 2018, he held a livestream, animating POWERLESS.fla. The description of the livestream said: "MC11 progress; idk a billion (currently the primary animation objective, on track for late summer/early fall release)". On another livestream held on June 23rd, he stated that it is sitting at "around 11,000 frames" and states that he is considering Madness Day 2018 as a hard cutoff date to release it.

On September 8, 2018, he made a blog post stating that MC11 would not be done for Madness Day and the next Deimos' Adventures animation is on hold until MC11 is done.

On September 22, Krinkels released a trailer. It depicts, in order:

Throughout the trailer, black electricity appears to crackle through Hank, and his magnified arm appears to be severed below the shoulder. Additionally, a remix of "Heaven In A Wild Flower", the song heard in MC3 and MC4, plays throughout.

On November 28, Cheshyre confirmed that he was producing the soundtrack for MC11.

On December 28, Krinkels mentioned that MC11 would be released "in the first days of 2019". On January 5 he said that the animation and music were "100%" completed but that the sound effects were "not quite there yet".

MC11 was finally released online for public viewing on January 8 2019.

The animation begins with the text:

THE THORN LODGED (MERGED) IN REALITY IS INFECTED.

The intro takes place in an unknown dimension, similar to the one seen in CHASE.fla, with red bloody essences falling from the sky. One of those essences falls to a platform in the middle of this endless void, forming a body. It violently convulses, stumbling and spewing red matter. It then spots another figure identical to it and attempts to attract it with lightning. It fails to attract the second being, and the mysterious red figure braces itself for a huge leap, piercing a massive white sky pillar.

The scene then cuts to:

We are brought back where Madness Abrogation left off: Hank and Sanford finally have climbed down the tower's ladder. They look around, only to find the summit of the tower, now rockier than ever, is covered in black fire, oozing black death downward. The black spew reaches the two, pooling up and spawning black skeletons which proceed to assault Hank and Sanford. The tower's wall breaks, and from the crack emerges a resurrected, skeletal Tricky, wearing the halo. He says: "CANNOT KILL CLOWN", shortly after that, he is swallowed together with the halo by his apparent next body, a giant skeletal form of his demon-version from Madness Consternation. The halo then reappears on top of his head before he starts screeching: "HANK!". Three walls come from the ground, preventing the two from escaping. He then screams: "HAAAAAAAAAAAAAAANK!", loud enough to force Sanford to cover his ears. Hank throws electric punches at Tricky's head as other skeletons begin swarming Sanford. The skeletons overpower Sanford, thrusting him into a black pool under him, as Tricky rips Hank's arm off, and punches him underground.

Sanford reappears in the same dimension that was shown in the beginning of the episode, welcomed by an undead Tricky, who spawns some agents. Hank reaches his partner, and throws Tricky on the wall while he tries to spawn his streetsign. The clown escapes the scene through a crevice on the side. After messily dispatching the agents, they find themselves immediately barricaded as spikes pop up, with the text "GET OUT LEAVE KILL" burning itself onto the wall. They escape to two different places. Hank, on the edge of a small cliff on the void, tends to his now freshly ripped arm stub, as the Auditor marks a surprise appearance with spikes, severely damaged and without his flaming aura. He then impales Hank with spikes and brings both himself and Hank into the void. The scene cuts to the building where Sanford is teleported. His old wounds turn black, then a Micro Uzi and Browning HP emerge from him. After he stops recoiling in pain, agents begin pouring out and fighting him. Tricky quickly emerges from the ceiling to confront Sanford, only to be quickly shot down and pinned. The building is ripped in half by Tricky, in a manner similar to MC3 and gets overturned, causing Sanford fall to another room. Here, Tricky-like skeletons attack Sanford. He makes quick work of them, fleeing as the room turns into a reverse pincushion. After killing more clowns, Tricky attempts to escape as Sanford lunges and spears him through the cranium. Sanford attempts to snatch the Halo and fails, as more clowns appear. An MP5K and a Trench knife emerge from Tricky's body before he flies offscreen. Sanford kills ten melee clowns, two shielded clowns and a shotgunner. Tricky appears again, taunting Sanford before scoring a home run on him.

Sanford hits a chunk of land and drops his shield, silently screaming in agony as he gets to his feet. Chains shoot out from the adjacent landmass and hook onto another landmass, forming a vertical landbridge leading upwards towards the light. Tricky spawns from the ground, a familiar M60, which he used in Madness Combat 3: Avenger, and emits a clown-like guffaw. He takes aim at Sanford, adjusts the range and begins firing, forcing Sanford to take up a Riot shield to defend against the bullets. Meanwhile, spikes start emerging from the floor several metres behind Tricky's location, and a restored, healed Hank bursts from the ground, with a new partially black arm. Hank then proceeds to pummel the hell out of Tricky like a ragdoll, with some new telekinetic powers, as he's seen able to lift and throw a levitating rock with his new arm, while still inevitably being home-ran just like Sanford.

Sanford is seen looking below the edge as Hank collides into his shield, causing him to fall over and leave a large crack. Hank jumps out of the crack and notices Sanford. Tricky enters the scene below the platform, although Sanford and Hank are not yet aware of this. Tricky summons a gravity lever (the same one seen in CHASE.fla) and uses it to change the gravity. The ground then rotates 90 degrees clockwise, dropping the duo to the floor and briefly disorienting them as Tricky attempts to crush them with a part of landmass.

Tricky flies to the right side of the scene and emits a low, distorted growl. He then falls into the ground below, spawning armed clowns. Hank pushes Sanford aside, commanding him to stand down, knowing that he can't possibly take them all on. He then dispatches the clowns with relative ease. After the two finish massacring clowns, a magnified Clown emerges from the earth, its mask being distinctly similar to Tricky's. Hank attempts to damage and/or remove the mask, only to be met with a strong punch, tossing him back. It then jumps out of the hole and proceeds to fight Hank, Hank now being able to successfully unmask the clown. The magnified clown seizes Hank, only for him to deliver a similar beatdown to the first Mag Agent V4 in MC10, punching it into the beam of light.

The beam expands, four more armed clowns emerging. As they jump out of the pillar and prepare to attack Hank, the music quietens and the scene freezes. A series of lines resembling a grid appears before the camera zooms in onto Hank. The background and grid then disappear, and another platform appears below Hank. The scene unfreezes and Hank is pulled towards a wall by an unknown force. A hole appears in the wall, and two lines resembling tentacles grab Hank. Cracks form along the walls, and short spikes appear coming out of those cracks. Hank is again pulled towards the wall by the "tentacles" and the spikes are pushed out further, becoming longer.

Hank steps forward, and two weapons float up from below the platform. One is a dragon sword with a red glow around the blade, and the other is an SCR M-Lok pistol. As Hank grabs the weapons, the spikes recede into the ground. The focus is now on Hank, with the text "VIOLENCE REQUIRED" and "VIOLENCE ACQUIRED". It then cuts back to the fully-armed Hank as he carves up more clowns. The magnified clown that Hank previously pummeled emerges from the beam, only to be quickly ground-pounded by Hank. The lightning effects from Hank's fist are now present on his dragon sword. As the red figures from earlier grapple Tricky, Hank quickly takes opportunity of this event to smash the dragon sword into Tricky.

The scene then cuts to Tricky in his skeletal demon form on the Nevadian surface. Tricky's skull explodes, the fire on his skull disappears and the halo falls off his head as many spikes rise from the ground. Hank and Sanford, either unconscious or lifeless, emerge from black voids as the Auditor then hops out of Tricky's skull, regaining the halo using his telekinetic powers. His head and body are still damaged and the cracks are still visible, but he has regained his flaming aura. The text "FINALLY..." is shown before the screen fades to black and the animation ends.