Madness Combat 9.5 is an animation from Krinkels. It is the fifteenth released Madness Combat episode in the canon series and the first installment to be split into two parts. The first part was released on October 2nd, 2020, with work on the second part underway. Ironically, the episode takes place after the events of Madness Combat 7: Consternation

The episode begins with several quick lines of text showing Hank floating in a void. The lines of text state a user named "Doc" is logged in and tries to run the command "Status;G2.Hank F$ -A -A1" before it is denied as "insolvent." The text "FRAGMENTATION FAILURE. DISSOLUTION DENIED AGAIN" appears and Hank is pulled downward, disappearing. More text appears on the screen:

YOUR INTEREST WILL BE TERMINATED

HANK WILL BE RETAINED

The scene cuts to a grunt in The Other Place, standing at the edge of a cliff. He walks over to a door where another grunt stands, partially covered in black liquid. The door opens and a third grunt enters, his mouth also covered in black, seemingly in distress. Several bolts of lightning strike him from the walls nearby, and the grunt's eyes start glowing red along with his chest wound. He is pulled towards the edge of the cliff, then suddenly pulled back, transforming into Hank as several enemies enter the scene. An ATP engineer and an agent Start to fight Hank, The Engineer accidentally cutting the fingers off one of the grunts with his falchion before being slammed into the ground by Hank. Hank then turns his attention to the two grunts, punching one into the other, knocking him off the cliff. Even more Agents and Engineers enter as Hank disarms an Engineer and quickly disposes of everyone with the Engineer's MP5.

Hank steps over to the edge of the cliff and stares into the abyss. A text message appears, saying "They're coming for you, Hank...". Hank looks at the dead grunt near him as the grunt twitches and another message from Tricky appears, saying "YOU GONNA COMPLAIN ABOUT IT, HAAANK?" as bits of Tricky's red hair sprout from the ground. Hank tries to dispose of him by shooting, but the grunt suddenly floats up and smashes into the ground, making a non-zombified Tricky emerge from the ceiling. He fights Hank, and Hank quickly defeats him by shooting with a Desert Eagle.

Hank enters the building and fights several agents with his sword and Desert Eagle. One of the agents inside can be seen writing "We are abandoned" on the wall. He catches two agents off guard and kills them before they have a chance to unholster their weapons and dodges an agent's sledgehammer attack before cutting his head in half. He then shoots an ATP soldat armed with an Uzi Pro before running out of Deagle ammo. He picks it up, dispatches an agent and uses his Sword to kill the remaining before lodging it in a soldat's skull. He then picks up an M-416 and goes over to the window to look outside.

He sees Tricky appear again in another location, accompanied by a few agents with the text "SO FAMILIAR..." appearing. Hank jumps out of the window and smashes into the ground. He takes care of the agents and eventually gets to Tricky, who is seemingly having trouble holding himself together as a glitch-like effect keeps appearing on his body. Hank shoots Tricky, who turns to Hank seemingly with no reaction, only to suddenly be struck by a large bolt of red lighting and disappear. Several more agents enter the scene, and Hank disposes of them, bashing one of the A.T.P. engineer's head with his own helmet. He then picks up the dragon sword, dropped earlier by an A.T.P. soldat, and enters the next room.

There, he takes care of more agents with said sword, impaling through two agent's heads at once upon entering. As he is fighting, a large, elevator-like panel behind him begins to move and lets more agents enter the scene, whom Hank quickly kills. The wall moves again, revealing a Retainer waiting to fight Hank. Hank quickly takes care of last agent present and then attempts to shoot the Retainer with a SPAS-12, only for him to suddenly teleport behind Hank and punch the gun out of his hand. Hank grabs a sword and attempts to fight again, only for the Retainer to suddenly punch him (partially through the wall) into the next room.

A dead A.T.P. soldat is laying on the ground, along with three agents standing at the edge of a cliff, staring into the abyss. Hank quickly picks himself up and takes care of the agents, throwing one soldat over to the spot from which he entered. As he finishes killing the other agents, the soldat attempts to get up, only for the Retainer to suddenly appear above him and smash into his head, killing him. Hank tries to shoot the Retainer, but the Retainer telekinetically forces Hank's aim away, making him unable to shoot straight. He forces Hank under, breaking the ground from below him. Hank falls into another room, with the Retainer following up with him. He grabs Hank's face with both hands as large stones appear from the ground, seemingly preparing to kill him.

Krinkels first revealed on August 28, 2019, on his Curious Cat page that Madness Combat 12 has been temporarily put on hold to focus on another .5 episode, which he would later describe on September 10th as "it's gonna be weird." During his Madness Day 2019 livestream, Krinkels would first show off two backgrounds for Madness Combat 9.5. Krinkels states the animation will be longer then DedmosRebuilt.fla, but he is playing with the idea of breaking it up into multiple cartoons so he can release one every few months, but he was still on the fence with the idea. Cheshyre was confirmed to be composing the music. While Krinkels was working on An Experiment, he showed off a bit of Madness Combat 9.5. On April 3rd. Krinkels said that 9.5 is the majority of his time spent on flash. He also put Madness Combat 9.5 at around 2K frames at that point and said that it would be finished in 2020, with the projected release date being Madness Day. On June 19th, Krinkels has said the first part of Madness Combat 9.5 is at 4k frames finished. On August 2nd, Krinkels said that Madness Combat 9.5 will be about 3-4 minutes in length. On August 20th Krinkels started a stream that showed him shading and creating backgrounds for 9.5. He also mentioned a new concept, called Retention, which he said would fit into the series in "His own stupid little way". The original deadline of Madness Day 2020 would be pushed back by a little over a week, due to issues regarding audio mixing, however, part one would later be released on October 2nd, 2020.

A teaser (Possibly the opening sequence) For 9.5 Pt.2 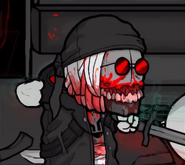