Mag Agent: Torture is the first version of the mag agent series. He is a giant l33t agent who appeared in Madness Consternation. There are two metal stakes pierced up through his head in an "X" formation. Despite the bloody wounds in his head, the stakes do not appear to weaken Mag Agent: Torture, possibly because he was revived this way. Other notable physical characteristics include clawed fingers, l33t shades, and an incredible size of about 250% of the height of a regular character.

Mag Agent: Torture first makes an appearance when he bursts out from the floor below and tries to kill Hank with his mag-sized Mossberg 500. Hank dodges the fatal shots (one of which breaks his L337 sword) and leaps down into the hole in the floor where Mag Agent: Torture is stationed, which happens to be under the building. Mag Agent: Torture shoots his shotgun and misses Hank who manages to shoot the mag agent repeatedly with a Saiga-12 in the face using bullet-time, but it didn't appear to inflict major damage. Mag Agent: Torture then knocks Hank down and smacks him across a canyon with his Mossberg 500, golf style. After Hank lands on and dispatches a few agents and grunts, Mag Agent: Torture inserts a "Supermagnum 20kg" slug into his weapon and chambers it. Hank flees into the building, whose wall is pierced by the slug, missing Hank but hitting an agent.

After Hank progresses further in the new building he is in, Mag Agent: Torture appears behind him, sticking his head in through a door. The mag agent is slowly killed when Hank turns around and uses a recently acquired chainsaw to ravage his face.

Mag Agent: Torture appears in Incident: 011A as the protagonist. He was first seen killing a grunt through a smashed hole in a wall, soon making a large enough hole to enter through. He then puts on his shades and states, "Their disharmony is my pain. And my pain... belongs to them."

Having apparently gone rogue and deciding to rebel against the AAHW, he makes his way through the building while massacreing groups of grunts, almost all counter-attacks being ineffective. Near the end of the episode, he encounters Rich. Rich manages to stab the mag agent's head with his iron knife, but with little apparent effect. Mag Agent: Torture knocks Rich against the wall, then crushes him with his own desk. Mag Agent: Torture is then shot in the head by another grunt wielding an M203 grenade launcher. After being unsuccessful in clawing it out, the grenade explodes, destroying his head and upper body. The janitor is then brought in to mop up his blood.

Mag Agent: Torture is the final character to appear in Incident: 1000A. He is ripped apart by Tricky in a matter of seconds. 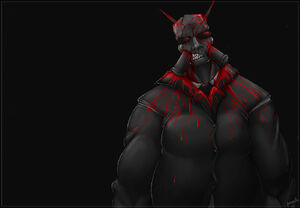 Drawing by Krinkels
Add a photo to this gallery