Phobos is the main antagonist and final boss of Episode 1.5 in Madness: Project Nexus's Story Mode. He is a highly skilled fighter whose size is larger than that of a regular character but slightly smaller than that of a G03LM. In this prequel, he was the controller of Project Nexus. He is fought twice in the episode, first in level [1.5-D], and secondly in the last level.

In level [1.5-D], Phobos appears with only his binary sword, realizing that Dr. Christoff had indeed defected from the Nexus. Using the binary sword, he can deflect almost every bullet fired at him and knock out any melee weapons used against him. However, if he is successfully hit by any attack, he will flee the room, telling Dr. Christoff that they will meet again.

In the final level, Phobos appears in the last room armed with the binary sword and a TMP. If he is holding the binary sword, he would protect himself by using it to block attacks. If he is holding the TMP, he would dodge attacks by performing very high back flips or utilize his hefty TAC-Bar. Despite his superior evasive power, he is still vulnerable to Nexus bolts and cannot block them with his sword. Once he is killed, Jesus will say to him, "Goodnight, Phobos." 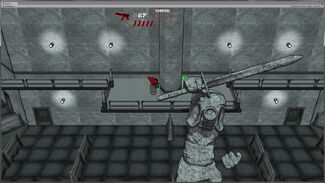 In a leaked screenshot of Madness: Project Nexus 2, a statue of Phobos in a powerful stance is seen, raising his binary sword into the air. It is unknown whether Phobos will appear in the game in person.