Riot guards are enemies unique to Madness: Project Nexus (Classic) and MADNESS: Project Nexus, debuting in Episode 1.5. They wear protective armor and masks and tend to move much faster than the other units. They also possess TAC-Bars that are much harder to wear down than those of other enemies. They are very agile and often dodge by flipping, making it fairly difficult to land a hit on them. Most of them carry two weapons, usually a combination of one gun and a billy club. Because of their armor, they are able to take in a large amounts of damage without dying. However, they will still die instantly if hit with a Nexus bolt.

In MADNESS: Project Nexus, the Nexus Core have a unit called the NEXUS Tactician or Coreman that was changed to the NEXUS Riot Guard. They have a lightweight riot shield and a random weapon, mostly being Shock Batons. 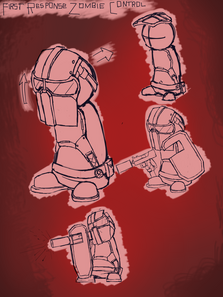