The Science Tower is a large building where much of the Project Nexus research was performed, as well as the headquarters of the Nexus Core and main focal point of Nexus City. It is featured in Episode 1.5 of Madness: Project Nexus (Classic). This tower is the most significant building in Episode 1.5, as most of the levels take place inside. The Science Tower is made up of four parts: Muto-Lab, Chapel, Vaults and Solarium.

The Tower makes a reappearance in MADNESS: Project Nexus, as the main location the protagonists must reach within Nexus City. However, in the sequel, it is much bigger, easily being seen from the outskirts of Nexus City and beyond.

The muto-lab, located on the ground floor, is where most mutation on undead test subjects was performed. Abominations are very common here. This floor is also the most insecure floor, as abominations tend to escape confinement frequently and attack troops or cause damage to the corridors. However, two spike gates block the entrance from most trespassers.

The chapel is located on the second segment of the tower. Despite the name, nothing on this floor suggests that it is used as a chapel. However, this floor does hint to the transformation of Dr. Christoff into Jesus. A primary purpose of this floor is for the containment of sleepwalker patients.

The vaults are located on the third segment. It is where one of the Project Nexus's artifact, the Halo was kept, until Dr. Christoff steals it and uses it for his own purposes in order to destroy the project.

Additionally, the Electro Cannon, another powerful product of the Nexus, can be found in one of the lockers contained within.

The solarium is the top level of the tower and Phobos' inner sanctum. Up here, the Nexus is perfected, finally seizing control over the zombies and abominations, who now cooperate with each other and the other Nexus units in their attempts to eradicate Dr. Christoff. It is up here that Phobos is encountered for the last time and finally defeated.

An Auto9 can be found in this level in one of the lockers.

In M:PN, the tower is more detailed and redesigned, with bigger rooms that are more distinguishable between them. 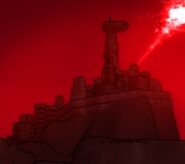